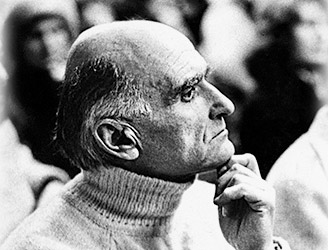 Boris Otarov was born in 1916 as the son of an Armenian family in Tiflis, Georgia, where he also spent his childhood. Despite his devotion to arts, he eventually followed his father's advice and graduated in physics and mathematics. Only years later, he finally took the plunge and dedicated himself entirely to art.

His eruptive style is evocative of spreading tectonic plates, while various layers of colours seem to constantly move and alter on his paintings. Under the influence of an inner energy, these pulsating layers unfold and become one, like a stream of lava during a volcanic eruption. This newly created unity shines through on his canvases in its warmest of colours. Otarov, whose art is based on elements like texture and colour, had never placed too much importance on artistic subjects in his paintings.

In order to visualize his thoughts and ideas to the spectator, the painter preferred to work with a diverse blend of materials, generating an astounding texture and corporal dimension in his paintings. Accordingly, his works reveal a three-dimensional structure. The materials used range from oil, tempera, pastel, resin, varnish, stone, glass, wood and metal to ceramics.