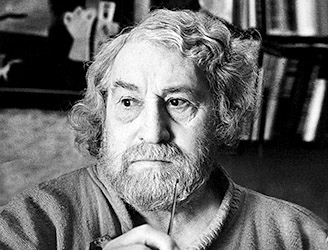 Marlen Spindler ranks among the best Russian painters from the second half of the 20th century. He was born 1931 in  the Kirghiz town Karakol. He spent his childhood in Samarkand and Tashkent. The source of his art work lies in his souvenirs of Central Asia, a deep love of Russia, its nature, orthodox icon painting and frescoes. His fate was very dramatic. Marlen paid for his yearning for freedom "without compromise" and artistic independence during 15 years of jail and exile. Through his loss of freedom, abstraction disappeared almost entirely because in order to do real abstract paintings one needs total freedom of body and soul.

In his art another reality opens, in which people become one with their surroundings, with nature. Unique structures and symbols, magic figures and mysterios creatures spring from his creativity which represents matters of his soul. Marlen's paintings are full of symbols of human life: the cross and the circle.

The trend toward the colour in Marlen Spindler's paintings from 1970 through 1990 is a sort of pilgrimage toward the light, unlimited freedom of expression in painting. In the violence of colour on canvasses during that period, Marlen Spindler tried to get past his temperament as an artist.

Landscapes are a sort of foundation for Marlen Spindler's abstract painting.

His strong emotionality shapes the style of his powerful paintings, determines their form and rhythm. Marlen Spindler is the phenomenon of his unique individuality.

"When I paint a picture, I try to be spontaneous and to do everything at once, 'in flight', so that everything is pure, and not laboured." (Marlen Spindler)