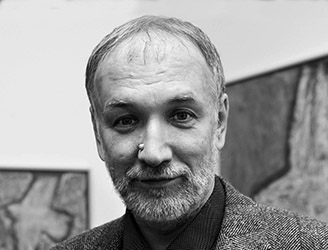 As a young painter, Mikhail felt an internal unrest and wanted to follow the uneasy path from impressionism toward the cubism and cubic-futurism of the world art community. Cézanne, Matisse and his compatriots Malevich, Lorionov, Gonchorova and Exter, among others, influenced Krunov's evolving style. The "quiet life" expressed on Morandi's canvasses greatly affected Mikhail who liked the harmony of the rhythms and the uses of colour, the inimitable simplicity of the compositions, and the original uses of space. Mikhail Krunov concentrates on essences and densities in his works inspired by birds, people, and the elements (sky, forest, and earth). For him the creative process becomes artistic "sensation", or the synthesis and the signs of images.

Kamensky comments on Krunov's process:
"Following the path of abstraction, the first step is generalisation: less attention is given to trifles, and outward appearances become the most important, even deciding expressions of feeling. The expression of internal feeling supersedes even visual plausibility, and canvasses appear that consist only of squares, and smaller squares, canvasses that are painted over entirely in whites by an artist scouring the depths of the colour white. And, as always, something else looms in the distance for Krunov, something that is unknown even to the artist. Yet, knowing this person, we can say that it will come into focus."