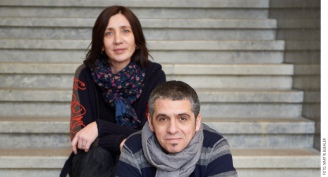 Olga (1967) is Ukrainian and Oleg (1966) is from Azerbaijan. They meet each other end of the 80s at the academy of arts of Lemberg at the ceramic department. They moved to Moscow after the dissolution of the Soviet Union. In spite of that the couple started with traditional art work, soon both of them focused on new ways, in unexpected areas. Their art works belong to the minimalism, an art form, which had not even existed in the visual tradition of the Soviet Union. The work of the Tataritsev’s perform as space filling installation from ceramic objects and pictures, which challenging the viewer’s perception.