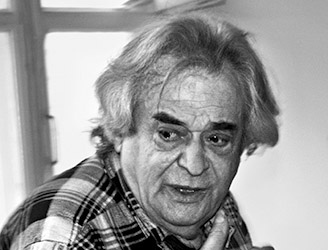 Since the 1950's Zlotnikov has been possessed with the idea of taking abstraction to the semantic level of signs, with a status of objective informative code. This led him to accompany his pictorial "texts" with literary texts. His "Signal System" was the foundation to all his future experiments and his attempt to find the psycho-physiological laws, the nature of human response to colour and form as well as the constant valency of graphic signs and categories, which was unprecedented not only in the Soviet art of that time but also in the world.

Zlotnikov now divides his work into three periods: "Psycho-physiology" ("Signals"), "Metaphorics" (until 1988) and "Thinking" (that is modelling the thinking process in his idiom, which has interested him since his ‘Neo-Construction' series).

The artist continues to pursue a new level of synthesis between the logical and the sensuous, as he expresses his vision of the dynamic balance of the world.