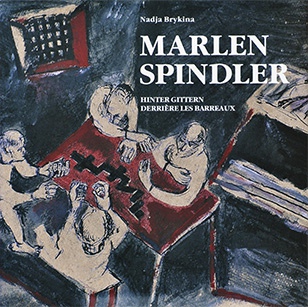 This publication presents the works of the outstanding Russian artist Marlen Spindler (1931–2003) who was endowed with a talent of extreme strength. The works published in this book were painted in captivity, this excellent painter having spent eight years of his life in Soviet prisons. Marlen Spindler spent a further seven years in internal exile.
The real reasons behind his incarceration were his uncompromising nature and his love of freedom, traits which were incompatible with the Soviet system. In spite of himself, he was ultimately able to reconcile himself to his circumstances and bore no grudge against those who had wronged him. The cruel ways in which totalitarianism manifested itself and humiliated individuals were, for him, always secondary considerations; the one and only purpose in his life was always painting.
Regardless of all the limitations placed on him, he continued to paint whilst in captivity. His canvases showed details of prisoners’ joyless existence. Cats purred in them. Landscapes sometimes came to life. And, in spite of everything, fl owers blossomed. The works the artists painted in prison diff ered considerably in spirit, style, use of artistic devices, colour range and subject matter from the paintings he painted when free. Marlen Spindler was always unusually sincere in his works.
Unfortunately, many of his masterpieces were burnt in the prison furnace, and only a fraction of his works could be saved by being smuggled out.